Roughly diamond-shaped, Angmassalik island, off the coast of Eastern Greenland, is 40 km long and 30 km. wide; it ‘s a mountainous island of granite polished by ice, with many small valleys modelled by the glacial erosion. Only the tops of the mountains are often sharp; obviously in the past they were Nunataq: this Inuit term refers to a mountain peak that rises from the ice sheet. And even to an evil person. 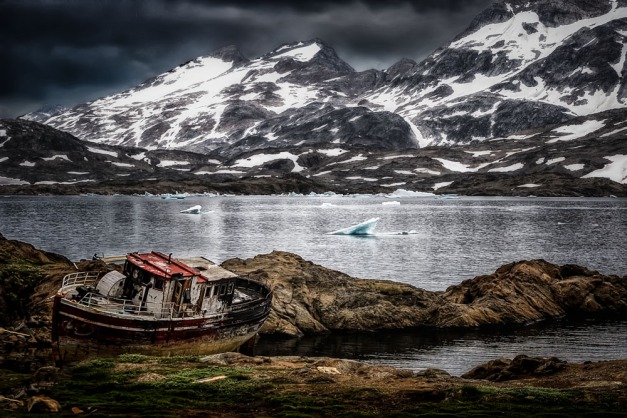 The sea that separates Angmassalik island from the mainland creeps in form of fjords of various size; by sailing with a small boat, it takes a whole day to make the tour of the island: first  you venture to the edges of the Polar Stream, then in the Sermilik fjord, a sort of river of iceberg, and then, through iceberg free fjords until you  get back to Tasiilaq.

It’s cold. On the sea there is a constant chill wind, the water has a temperature close to zero Celsius and iceberg are everywhere. You need warm and windproof clothes to avoid frostbite. And, above all, it is essential not to splash in the water!

We are at  the mouth of the Sermilik: a fjord over a hundred miles long with an average width of about ten kilometers that receives ice from 12 glaciers of the area. While you get closer to the bottom the fjord gets narrower and the water is full of iceberg of every size.  But this will happen later. We are just at the mouth of the fjord and between the mist we see a wooden dock. We are in Ikateq!

Ikateq’s official population is: one.

But we can’t see anybody walking the path carved in the granite, through the wooden houses, the church, the school and the deposits.

In the years of its greatest development Ikateq’s population rose up to 70, not bad for the almost inhabited Greenland (total population 56.000, less than the town where I live, with a density of 0,026 per sq. km); they were mostly hunters, sometimes with their families. 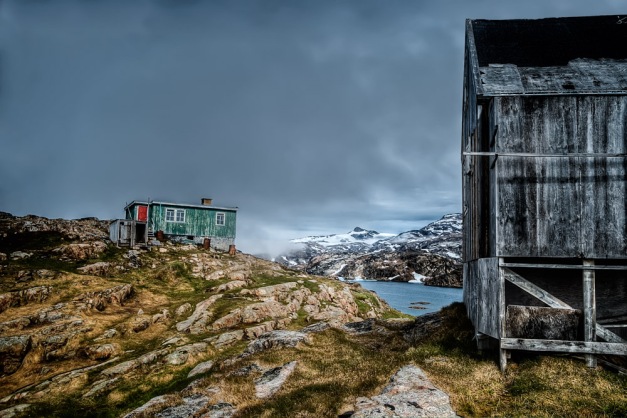 When hunting was largely banned and regulated by the Danish government, they lost every source of livelihood and moved to Tasiilaq, in search of state subsidies and cheap alcohol. In Ikateq remained only women and the elderlies, then gradually the women reached their men in Tasiilaq and only the elderlies remained, who slowly died.

The last one passed over in 2005 and since then the village is uninhabited even though the official  population is still 1. Probably  the last resident has’nt found a way to opt out from the population registers.

We climb the hill on top of which there are a few wooden buildings, a warehouse, a large structure for drying fish and a church with a classroom. Everything looks as if the town is still inhabited: in the church the organ still has music sheets on the lectern; in the classroom there are books on the table, chalk close to the  blackboard ; an old fashioned map with shapes and names of countries that no more exist hangs from the wall.

The houses around have windows with clean glasses: you can look inside and see the the decor, coats on the hangers, dishes, lamps. Outside there are wooden sleds and kennels for dogs, storage sheds for tools and spare parts for boats.

But nobody is around.

As if time had crystallized because of the cold, as if  people were all suddenly gone and the town hadn’t  gone through a long period of decay;  or as if someone comes to clean every week. Luckily during the arctic summer the is no night, because I would have been afraid of the ghosts that surely wander through these houses!

But there is no mystery of course:  in winter, when the inland waters freeze you can get here with sleds, and Ikateq is still used as an outpost and a shelter by the hunters who come from other villages of the district.

The harsh climate, the lack of dust and the absolute lack of damage caused by other people help to keep the appearance of a town  whose inhabitants are all gone somewhere for an urgent task, and will come back later.

Would you like to read all my upcoming travel stories?

I will mail you only when I release a new article and you data will never be sold to anybody!

Or, if the above link is broken, just copy and paste into your browser this URL: http://eepurl.com/beHmLf